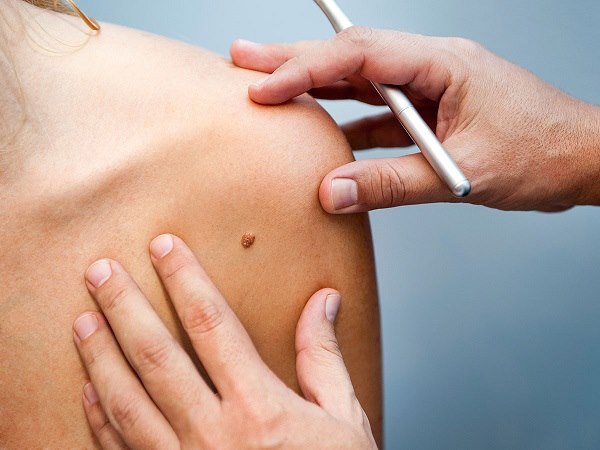 A Guide To Skin Cancer Symptoms

Basal cell carcinoma (BCC) is the most common of the three main types of skin cancer, accounting for around three quarters of all skin cancer cases. BCC is commonly found on areas of the body regularly exposed to direct sunlight, however genetic susceptibility can sometimes reveal symptoms elsewhere in the body. Thankfully, BCC isn’t particularly spreading (capable of spreading around the body) and the survival rate is high if diagnosed early.

Squamous cell carcinoma (SCC) otherwise known as epidermoid carcinoma, is a less common but more severe form of skin cancer. The metastatic risk is higher, with SCC capable of spreading to internal organs and not being restricted to the skin. SCC is mostly prevalent in older generations, with the majority of patient cases being over 50 years old and is more commonly seen in men than women.

Melanoma is a form of skin cancer that develops within the pigment-containing skin cells known as melanocytes and is globally recognised as one of the most deadly forms of skin cancer. Survival rates are high if diagnosed early on, however if the melanoma has spread further into the body then the chances decrease dramatically. Melanoma is more likely to develop within fair skinned patients, but can affect anyone. Once again, similar to SCC, Melanoma is more prevalent in men than women.

BCC symptoms usually include bleeding skin ulcers or growths appearing, which can often be mistaken for old scar tissue.

SCC symptoms can appear as an ulcer or slow-growing tumour, although the physical appearance of the growth can vary greatly.

Melanoma symptoms often take the form of an existing mole or dark patch of skin changing in its appearance.

This can be anything from changing in colour, shape or size and sometimes even a new mole or skin growth can appear on the body. If you have any worries at all, it is always advised to see an experienced dermatologist for a “mole check”.

Dr Firas Al-Niaimi runs his private practice from a Harley Street location in London; click here to find out more about his “mole removal” services.

How is skin cancer diagnosed?

In most cases, skin cancer diagnosis is initially performed by a GP, often then referring patients on to hospital or a specialist clinic for further tests and/or biopsies in order to determine the type of skin cancer.

If you have any concerns or potential symptoms, we would strongly advise that you go straight to a qualified dermatologist with vast knowledge and experience in skin cancer diagnosis.

If you are seeking a dermatologist in London, then don’t hesitate to contact or a Dr Al-Niaimi’s personal secretary who can book you in for a consultation.